Get To Know Our Dean

The Visayas State University complies with the conditions of good governance as set by National Budget Circular 542, reiterating compliance to the General Appropriations Act of FY 2012.

The Visayas State University recognizes the People’s constitutional right to information and state policies to full public disclosure and transparency in public service. The said training-seminar aimed to enhance the service capability of at least 25 Barangay Animal Health Workers (BAHWs) in identifying basic clinical signs of animal diseases of economic importance and to get updates on the current situation of African Swine Fever outbreaks in the country. The BAHWs are volunteer workers who help in the delivery and implementation of animal health programs by the governemnt in their respective barangays.

Dr. Bagot focused on notifiable terrestrial and aquatic animal diseases listed by OIE (Office International des Epizooties) that are relevant to the country. While many of these diseases are not present in the country, a number of emerging and re-emerging diseases are increasingly becoming a threat not only to animals but also to public health.

Dr. Peña on the other hand presented a briefer on African Swine Fever(ASF) a dreaded pig disease which caused a havoc in the Philippine swine industry resulting to thousands of pigs culled in some areas in Luzon and Mindanao. Currently, at least nine regions covereing more than a thousand barangays thoughout the Philippines have confirmed ASF infection.

CVM in collaboration with the Philippine College of Swine Practitioners (PCSP) is hosting the 1st Virtual Pinoy Pork Challenge Roadshow 2020!

Region 8, where Baybay City belongs, is located in the eastern seaboard of the country and serves as a major corridor for travel and commercial activities of people going to and coming from the northern and southern parts of the Philippines, largely via the Pan-Philippine Highway (AH 26), which passes through these islands.

Since the region is still currently free from ASF, the role of the different stakeholders of the region’s swine industry in the maintenance of the ASF-free status of the whole Visayas (and beyond) cannot be taken lightly. It is hoped that the said seminar has enhanced and encouraged the BAHWs on animal disease identification and monitoring while taking significant steps to prevent the entry of ASF virus in the area. 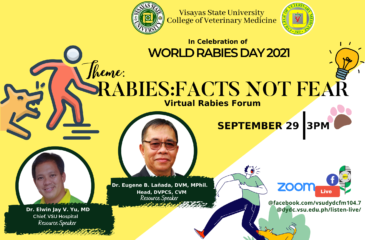 On Tuesday, 28 September, we celebrate the World Rabies Day 2021 (WRD 2021) with this year’s theme: “Rabies: Facts, not Fear”. The WRD celebration every 28th day of September is both a commemoration and a collaboration towards a common goal of eradiacting rabies by 2030 (Zero by 30). While we commemorate […]